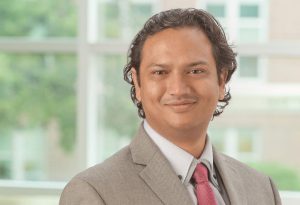 I am a Neurologist who specializes in the treatment of Movement Disorders. My primary interest is in Parkinson’s Disease (PD). After joining University of Nebraska Medical Center (UNMC) as faculty, I developed and became the Co-Director of Comprehensive Multi-disciplinary PD Clinic at UNMC. As a fellow at UNMC, I initiated the Orthostatic Tremor (OT) Research project which grew to become the largest ever prospective ongoing research project on OT, supporting multiple ongoing studies that I continue to be actively involved with it. I coordinated and participated in 3 International OT meetings at UNMC to conduct the research on this rare condition. I have strong interest in PD neuroprotection and participated in study of Leukine (GM-CSF) for immune-modulation in Parkinson’s Disease, which is a Phase 1a study. As a member of PD Study Group (PSG), I continued this research and am currently participating in 3 Multi-center PSG sponsored neuroprotection trials including STEADY-PD3 (Site Sub-I), SURE-PD3 (Site PI), and NILO-PD (Site PI). I recently expanded by research in PD to investigate driver safety in PD, and have developed novel mobile applications to measure a PD individual’s changing motor symptoms via finger-tapping and their self-awareness of these motor symptoms, which is modulated by complex cognitive and disease factors.

Other Experience and Professional Memberships